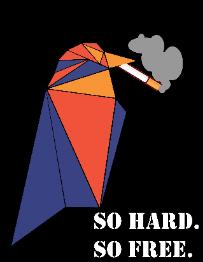 “Ravencoin So Hard So Free” is a one of one NFT generously donated to the WagmiNFT.net site. This NFT shows a Ravencoin Logo smoking a cigarette with the words “So Hard. So Free” written beneath it in white text. This meme was adopted in the Ravencoin community because it’s algorithm makes it hard to break. And Ravencoin is free because no one owns Ravencoin. It is free and open source code released to the public on Bitcoin’s birthday in January 2018.